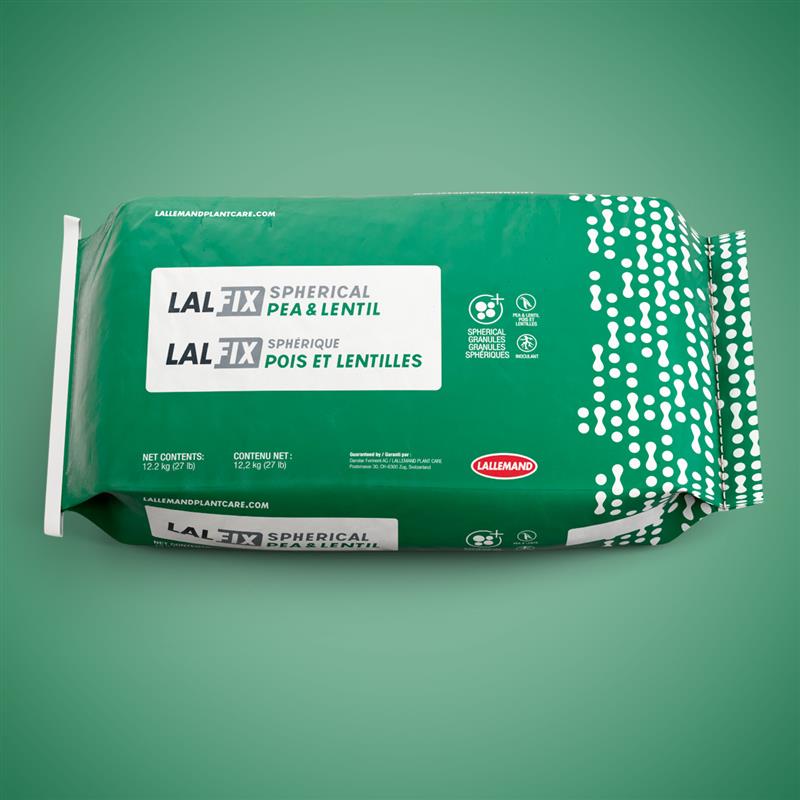 Introducing the Future of Granular Inoculants for Pea & Lentils

* Not all products are available in all markets nor associated claims allowed in all regions.

The bioengineered spherical granule carrier, with its high porosity structure maintains the growth environment, protecting and preserving the selected two active strains of bacteria. It offers unmatched performance, durability and ease-of-use. Once applied to the soil, the highly-efficient bacteria will colonize the root promoting early nodulation and N fixation for better crop establishment and enhanced yields. Spherical granules superior formulation provides the selected active strains of bacteria with a protected microenvironment that allows for increased survival.

It is intended for peas and lentils growers focusing on the benefits of strong nitrogen fixation and granular ease of use.

“We put LALFIX SPHERICAL next to Nodulator on peas this year. The application went really well for us. It’s a nice solid product with very little dust. I’d compare it to canola, it’s pretty uniform shape and size and metered out very well. The clean out was very easy because there was no dust or anything to get hung up in the tank. Overall it was very easy to calibrate. With it being solid pieces, rather than some inoculants that are a little dustier, it flowed really nice with no bridging. We noticed there were no lumps in the bag or tank if you rest it whereas with some of the competitors you can get that if you leave it in the tank over night. With our local retailer we pulled some plants out to check the roots and nodules and we’re quite happy with it so far. There were lots of nodules and it seems like they were spread throughout the entire root system which is nice to see. We cracked them open and they’re all pink inside so they are definitely fixing nitrogen. We’d consider using LALFIX SPHERICAL again based on what we’ve seen so far this season. As long as the crop yields the same or better we will absolutely use it again, like I said it was really nice to use. New technology is important because we’ve been typically doing the same thing or something similar for years and years, so that’s why we try to keep a good crop rotation and have something different introduced into the soil is always a plus especially if it can give you a yield advantage or even just a step up from where you were. It can’t hurt to change it up rather than doing the same thing over and over again.”
Michael Cymbaliuk, Two Hills, Alberta

“We did a trial of LALFIX SPHERICAL on peas this year. I felt like the product was excellent in terms of the packaging size, it weighs less than 50 lbs and was very easy to handle. The bags were fairly light and the product itself was very uniform coming out of the bag. What really impressed me was the flowability. We seeded about 20 acres and then the inoculant sat in the air seeder tank for 4-5 days until we were able to finish it off. When we went to use it again after those 4-5 days had passed, there was no moisture in the tank and it came out with no problems; there was no bridging. We had trouble with the competitor product bridging (even if it sat for 24 hours). One thing that was frustrating was we seeded 750 acres of peas this year and I ended up seeding about 50 acres before realizing that the other inoculant we were using had bridged in the tank and wasn’t coming out. That cost me an extra two hours in the dark to go back over to try to figure out where I had missed and put the inoculant back on. That made for a long day. We were out to dig up a few pea plants inoculated with the LALFIX SPHERICAL and the nodulation looked good. I would definitely recommend LALFIX SPHERICAL and would use it next year again. It’s important to embrace new technology because that’s the future. If you get stuck in one area or on something you get left behind really quickly. There are always advances being made so it’s up to the producers to take advantage of that or not. I think it’s just good business to try to incorporate the newest and latest technology (as long as their affordable) into your farming practices.”
Rob Zerr, Langenburg, Saskatchewan